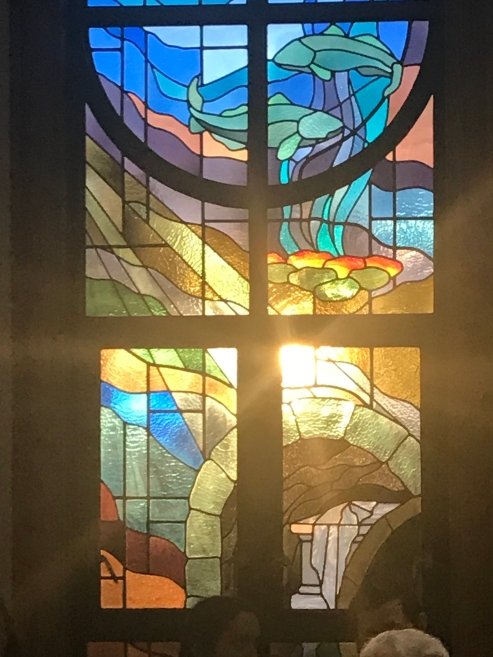 In my parish, this window is one of three forming the back wall of the music area, where I have “lived” for the past nineteen years. Every once in a while, the setting sun illuminates the resurrection beam. It’s a glorious moment.

Holy Thursday was cloudy and chilly all day. But in the middle of Mass, the sinking sun broke through the clouds and sent this beam of light coursing down the image of Heavenly power breaking through into the humdrum, workaday world. Juxtaposed against the anxieties I have been contemplating in recent weeks (and months, and years), as well as against the Triduum whose celebration we were just opening, it felt particularly meaningful, and particularly pregnant with hope.

This is my wish for a blessed and hope-filled Easter for all those who love the Lord. The Eucharist is a medicine we all desperately need–ourselves every bit as much as the people our minds leap to when we start trying to identify “the sinners” of the world.

I share this thought on Holy Thursday, as we gather to remember the institution of the Eucharist. I’ll be leading the choir and praying for the Church tonight. In my “other” life, part of what I do is writing and composing for the Church. Recently I found out that my newest song from WLP, “Show Us Your Face,” was named as a finalist in the Association of Catholic Publishers’ “Excellence in Publishing” awards for 2019. You can hear it on the “listen” tab at this link.

Two other songs are in the running, both of them fierce competition:

Rise Again, written by my friend Christian Cosas; and Struggler, by Brother Isaiah and the Franciscan Friars of the Renewal. Hope you’ll listen to all three!

Of everything we heard yesterday at Mass on Palm Sunday, these are the words that leaped out at me. If Jesus’ life and message were so threatening when he was living and breathing and working wonders (“when the wood is green”) that they could hand him over to one of the most brutal forms of execution ever known, then what we’re experiencing today, “when it is dry,” shouldn’t be a surprise.

We’ve been talking about a Church in crisis for so long, I think we’ve tuned it out. And it’s not just a crisis within the Church; it’s a crisis that consumes the entire world. The stark division between U.S. political parties is mirrored within the Church, with people on both sides picking and choosing what issues matter and which ones to pretend are irrelevant–as if doing so is not, inherently, an offense against God Who makes no such distinctions. The one thing we all agree on is the horror of the abuse crisis, but we’re so busy pointing fingers at scapegoats (Vatican II! Homosexuals! Clericalism!) that we substitute outrage for action.

I’m not browbeating anyone here, because I’m as guilty as anyone else. I think most of us feel helpless, and enraged by our helplessness. Composer and recording artist Sarah Hart posted this video a few days ago, and all I could think was, “But what do I do?”

When we look back at Church history, we hear about the antipopes and Catherine of Siena scolding the Pope to get back to Rome where he belonged. We hear about the Reformation. But not until the last few months have I begun to consider what it must have been like to live through those earlier existential crisis moments within the Church.

We’re living one now. And it’s awful. The strength of our Church–its apostolic hierarchy, which protects us from the human fickleness–is working against us, because the system is stacked against the lay people. What power do we have? How can we actually impact anything?

Catholics are not accustomed to speaking out to our leadership. To saying, “This is wrong. This is not the Gospel.” We were taught that they knew the Gospel and could be trusted to lead us in it. All we had to do was keep our mouths shut and do as we’re told.

But you know what? That facile approach to faith is a cop-out, because we, too, are called by our baptism to be “priest, prophet, and king.” We can’t just show up on Sundays and trust that it’ll all work out. We have to stand up and speak. And not just about the travesty of the abuse scandal, either.

But saying that terrifies me, because I was taught to respect the call of the priesthood. Which I do. I have known a number of good, holy men over the years whose commitment and realism have helped me grow in my faith. Since day one, I have been praying for God to call one of my children.

But respect does not mean blind, unquestioning obedience. Look where that got us! We, the laity, enabled the crisis by putting priests on a pedestal, acting as if their vocation is better and holier and more important than ours. By separating them, isolating them, and viewing ourselves as second class citizens in our own Church.

I don’t know what the solution is. All I know is we can’t  just keep going to our prolife meetings and choir practices and pretending like the problems will go away if we just ignore them. We need to recognize that some within the Church are using this as an excuse to further their own pet agendas (high church and scapegoating of gays, to name a couple).

This is not okay. We need to stand up and do something. Pope Francis quoted St. John Paul II in Laudato Si’. This is how I feel about creation. Yesterday I spent two hours hiking four miles in a local state park. I set off anxious, my brain buzzing; I returned to the car with painful toes and a peaceful spirit and quiet mind. To be in nature is to spend time with God. 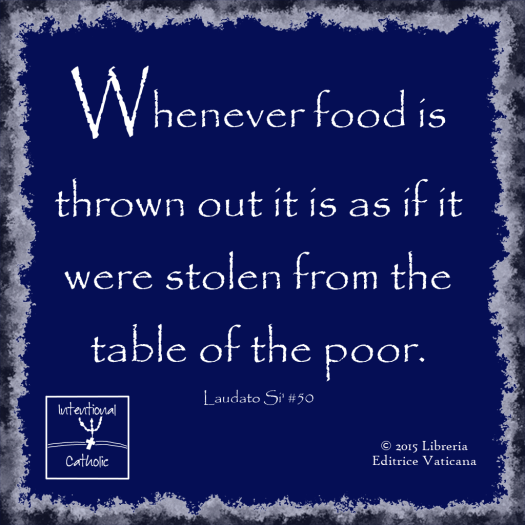 When I read this, all I could think was: wow! How much food goes to waste in the United States, again? A third of what’s available? Even today, years after first reading this quote and making changes to make sure we waste as little as possible, there is a bag of lettuce going bad in my refrigerator. Stolen from the poor, indeed.

This is the first of many places where this encyclical challenges us to examine our habits and make changes, because stewardship of creation goes hand in hand with care for “the least of these.”